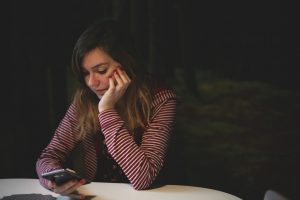 Why Too Much Social Media Is a Bad Thing

Social media has been the dominant media platform for the last 10 years or so. With more than 77% of the US population, you would think that there is nothing wrong with logging onto twitter or Facebook every day. But recent studies have suggested that too much social media is harmful and quite addicting. Do you wake up and immediately check your phone? Do you hop on social media when you’re down or bored? Chances are you might be addicted and you didn’t even know it. Today, we will discuss the risk of social media and how to limit its effects on your life.

The Beginning of Social Networks

Social media began in the 1800’s with the invention of the telegraph. People were able to send messages over long distances revolutionizing the way we communicate. Social media that we know of today can be dated back to the early 2000’s with sites like Myspace, which allowed friends to connect on one platform giving the ability to share thoughts and ideas. In 2006, Facebook became available worldwide built on the idea of connecting those in a similar college community. Facebook approached its creation with a different guide, hiring a psychologist to develop a way to keep users online as long as possible. This idea eventually spawned the like and share button. You know that feeling you get when someone likes your photo on Instagram or shares your Facebook post? That euphoric feeling is actually a release of dopamine from your body.

Dopamine is a neurotransmitter – one of the chemicals that is responsible for transmitting signals between the nerve cells. Dopamine creates the feelings of love, infidelity, motivation, attention, femininity, learning, and addiction. These little spurts of dopamine create emotions and human feelings that make us, well, human. But too much of dopamine is a bad thing. By releasing too much dopamine, you can cause chemical imbalances in your brain, which is detrimental to your health, happiness, and mental stability. Too little dopamine causes you to be unmotivated and joyless. Too much dopamine can make you aggressive, less cooperative, and empathetic. Social media causes you to have a dopamine high, creating an addiction to the platform.

How To Limit Usage

Social media can be very dangerous for young developing minds, and as a parent, it is important to know the risk for your children. With more than half of children by the age of 10 having a social media account, limiting their exposure is important. Social media has an age restriction of 13 and children should not use it until then to limit the effects on growth.

Teaching kids the appropriate behavior online is one ways to help your child make the right decisions on social media. Furthermore, children need to understand that the content they publish on the internet can last forever. Since a child’s pre-frontal lobe is not yet fully developed, they can be impulsive with the content they post online – another reason why there is an age restriction. Before sending out a post, re-read it and decide if that post is safe and not revealing too much information. Teach your children etiquette and if their grandma wouldn’t approve, they shouldn’t either.

In addition, bullying and harassment are all to common on social platforms – a big reason why parents should limit a child’s exposure to negative online interactions, as it can hurt a child’s self-esteem. If you’re worried about your children’s exposure to social media, limit their time and be sure to follow them.

It is the responsibility of adults to make sure children aren’t being exposed to the wrong ideas and on social media. It is possible and should be taken seriously. For more ways, social media effects your brain check out this quick video.