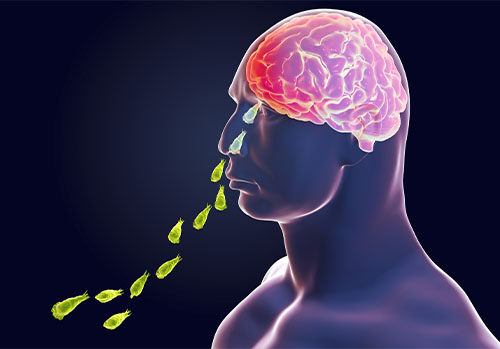 As we near Halloween, many of you are probably in a spooky state of mind, watching scary movies and telling haunting stories to prepare for Halloween festivities. Well, I have a scary story for you! You have heard of brain-eating zombies, right? Scientific research shows that there is something far more terrifying− brain-eating amoeba− which happens to be very real!

What is Naegleria Fowleri?

Naegleria fowleri is a single-celled amoeba that commonly resides in warm freshwater throughout the United States, with just over half of its population living in southern states like Texas and Florida. It can be found in many contaminated lakes, rivers, hot springs, unsanitary swimming pools, and even water heaters. This deadly amoeba survives best in hot temperatures up to 115°F, making southern states an ideal environment for reproduction and growth. It cannot survive in bodies of saltwater, properly cleaned swimming pools, or sanitized water heaters. Naegleria fowleri is microscopic and is unable to be seen, measuring no more than 8 to 15 micrometers wide. So, do you come in contact with this brain-eating amoeba? How can you avoid contact if you cannot see it?

Since this amoeba lives in bodies of unsanitary freshwater, you can be exposed to it by swimming in a river, water skiing on a lake, or even by using contaminated, un-filtered water in nasal rinses. You cannot get infected by drinking unsanitary water where hosts of Naegleria fowleri are present. Naegleria fowleri can only infect you by traveling up your nose, so if you sniff in the shower while using contaminated water, or if water accidentally goes up your nose while swimming or water-skiing in unsanitary bodies of freshwater, this can be very detrimental to your health. The amoeba then shoots up the nose and nests within the olfactory nerve−the nerve that carries smell to the brain−making its way up to the brain where it will begin feasting. Originally, this amoeba would eat bacteria within contaminated water sources; however, while inside the human body, it uses the brain as a source of food−much like a zombie. Mmmm, brains!

After infection, symptoms commonly set in within 2 to 15 days of contact. Symptoms may be similar to viral meningitis such as headache, fever, nausea, vomiting, seizures, sometimes even leading to a coma. 97% of people who have been infected experience these symptoms, with a majority of the victims nearing death as the parasite replicates and feeds. There may also be signs of hallucinations or altered mental states as symptoms worsen. Death may occur within 3 to 7 days after the first symptom arises. Early treatment and diagnosis are crucial for survival. Treatments may include antifungal drugs and antibiotics to decrease the amount of swelling in the brain.

There are a few ways to eliminate the potential contact with Naegleria fowleri. Avoid putting warm tap water in nasal rinses like a neti pot and decrease the time you spend swimming or participating in water sports and activities in the late summer months, especially activities that require putting your head underwater. Remember, warm or hot freshwater is Naegleria fowleri’s favorite environment, so avoid bodies of fresh water in the warmer months of the year. You can also wear a nose plug or goggles with a nosepiece if you do decided to participate in water sports.

If you start to show symptoms of high onset fever, sudden headaches, or vomiting after being in warm freshwater, seek immediate medical attention for treatments. Run, don’t walk! The earlier the treatment, the better the chance that you may survive−unlike your chances of survival in a zombie apocalypse!

We hope that this information on Naegleria Fowleri is helpful for you.