During the American Revolution in 1775, colonists were fighting under multiple flags rather than uniting under one. The Second Continental Congress met in June of 1775 to create a unified colonial fighting force. Thus the Continental Army was created, under the first “American” flag, the Continental Colors. Many thought this was too similar to the British flag, so George Washington set out to create a flag that would boost morale by acting as a symbol of freedom. On June 14, 1777, the Second Continental Congress passed a resolution stating that “the flag of the United States be 13 stripes, alternate red and white…the union be 13 stars, white in a blue field, representing a new constellation.” President Woodrow Wilson then established June 14, 1916, as Flag Day to honor the date of the creation of the United States flag. Many people don’t even know it exists, so here are some Flag Day facts. 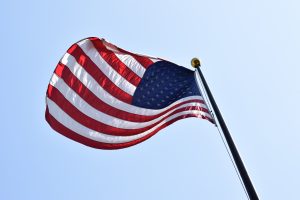 Flag Day Fact #1 – A teacher from Wisconsin by the name of Bernard Cigrand originally came up with the idea of an annual flag day in 1885. He, too, chose June 14 in honor of the passing of the revolution in 1777. He led his school in the first formal observance and continued to advocate respect for the flag until his death.

Flag Day Fact #2 – In the 1950s people began modifying the flag to add a 49th star when it became known that Alaska was about to be admitted to the Union. But one Ohioan was ahead of all the rest because he began rearranging the flag in his home so that it would proportionately fit 50 stars. He was certain Hawaii would gain admittance shortly after Alaska. After submitting his flag as a high school history class project, he then sent it to his congressman. Following the admittance of both states to the Union, Ohio congressman Walter Moeller brought this new flag design to President Eisenhower. The President chose 17-year-old Bob Heft’s design and it was raised for the first time on July 4, 1960.

Flag Day Fact #3 – When the flag is taken down from its pole (any and all United States flags), it is important that it does not touch the ground. Since the flag is always supposed to be aloft, rugs with the flag design are actually barred by the “Flag Code.”

Flag Day Fact #4 – The practice of draping an American flag over a coffin is not actually reserved for the military and government. Any burial can include this tradition, even if they have never served in the U.S. military or held a position in government.