Skip to content
Home » Health » Drive-In Theaters During The Pandemic 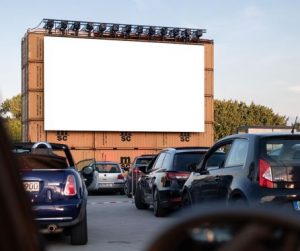 Since the beginning of the pandemic, the entertainment industry has been almost completely on pause and people have been desperately looking for any way to get out of the house while staying safe. Enter the drive-in movie theater, a business idea from the 1930s that is strangely perfect for just this situation and the drive-in has made a huge comeback during the pandemic.

The drive-in began in 1933 with the opening of the Park In Theaters in Camden, New Jersey before they even could play audio through car radios. The sound quality was poor initially, but soon after it began the ability to play audio through the radio came along and improved that aspect. The revolutionary new way to experience film took off and peaked in popularity during the 1950s and 60s with the peak number of drive-ins being 4063 in 1958.

The drive-in business began declining in the 1970s. By the end of 2019, there were just over 300 local drive-ins across the country. However, since the pandemic began there has been a drive-in resurgence. Several traditional move theaters began converting their parking lots into drive-in theaters during the COVID-19 lock-downs to still be able to have their business, and Walmart began a program where they are hosting drive-in movies at their store locations across the country. The progression in technology has also greatly benefited the drive-in industry with dramatically better screens and Bluetooth technology making the video and audio quality of the drive-in theater far better than it ever has been before.

Why The Drive-In Is Great During The Pandemic

With the need for social distancing during the pandemic, drive-in theaters are perfect because it is possible to stay entirely away from people through the whole experience. Patrons staying in their cars makes it far less likely that the virus would be spread unless there were to be many people leaving their vehicles during the showing. The entertainment industry not being able to put people in seats in traditional theaters has been the reason for the drive-in resurgence and it has been a way to keep it going despite many popular releases being delayed. Getting out to drive-in during the pandemic could be a great way to get out of the house with your family or for a date night during these difficult times.