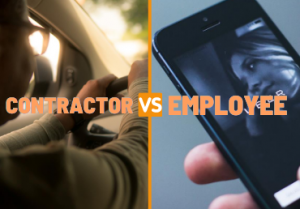 In a recent suit in the California supreme court, Uber and Lyft was ordered to reclassify drivers as employees under the law rather than contractors. This would require a fundamental shift to their entire business model and make the service almost unrecognizable.

Contractor Vs Employee Under The Law

Before discussing if Uber drivers should be employees or contractors, it is important to understand the differences between the two both in terms of what classifies them and how employers must treat each one differently.

When a person is considered an employee their employer is required to provide the previously mentioned benefits and set a regular wage. This would fundamentally change how Uber and Lyft operate because drivers are not given a schedule, regular wage, have taxes taken out of their pay, nor are they given benefits.

California has a unique clause on determining if a worker can be a contractor that other states do not have, and that is that California decided that if a worker does the activity that is core to the business then they are an employee. For example, an electrician being hired to fix the wiring at a retail store does not contribute to the core business and is a contractor, but a bakery hiring a cake designer to be a contractor from home does contribute to the core business and that person would need to be an employee. Therefore, it is California that is forcing Uber and Lyft to make these changes rather than any other state or federal mandate.

A few days ago, Uber and Lyft were given the opportunity to temporarily continue operations in the same way they had been while they push this decision to an appeals court, but they are required to come up with a plan of action to shift their drivers to employees by September just in case they lose. The suggested plan that Uber has come up with is by utilizing a franchise model in which a third party would give set schedules to drivers, set their wages, and tell them when and where they drive and turn it into essentially another taxi in California.