We often hear the phrase “laughter is the best medicine,” and science has proven this to be true! Having a good laugh reminiscing about childhood, or watching a movie or comedian could allow you to reap the many benefits of laughter.

1. Laughter Conveys a Message of Good Will.

BMC Complementary and Alternative Medicine state that “[b]ecause some forms of smiling are voluntary and easily faked, laughter, which requires a more synergetic contraction of the wider musculature is believed to have evolved in humans to express a secure, safe message to others.” Laughing puts you and those around you at ease and is a simple way to break the ice around people you’ve only recently met. While laughter may be unique to humans, even primates use facial expressions with bared teeth to suggest friendliness. 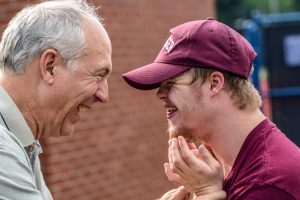 Stress is known to be a major leading cause of high blood pressure – also a risk factor for heart disease and stroke. Studies in 2011 and 2017 both proved that laughter was a great form of “therapy,” with both test groups testing at lower blood pressure levels. In these studies, laughter was proven to work better than music at lowering blood pressure. After three months of observation, blood pressure significantly decreased due to laughter but did not drop with music.

The ways laughter has impacted health led to the creation of laughter yoga. Laughter yoga consists of group laughter and using laughter as a bodily exercise. When compared to a non-laughing control group, laughter yoga participants saw a significant reduction in their systolic and diastolic blood pressure. Laughter yoga is now being used as an intervention for many health issues.

4. Laugh Away Anxiety and Other Emotions.

Over 20 years ago, Psychological Reports found that when anticipating something bad would happen, a group of subjects who watched a humorous tape experienced less anxiety than the subjects who had no tape, or a non-humorous tape. “Laughter therapy” has also been shown to ease anxiety in Parkinson’s patients, as well as anxiety and depression in nursing students, and lift the mood of menopausal women. Many of us know someone who uses humor as a coping mechanism, now there is a valid reason why.

5. Laughing Can be a Natural Anti-Depressant.

While you can’t treat your depression and other mental health struggles with laughter alone, there are studies to prove it could act as a healthy way to boost one’s mood. One study tested the effects of laughter on patients in long-term care hospitals. Patients underwent eight sessions of “laughter therapy” including singing funny songs, playing with hands and dance routines, and laughing exercises. Reduced depression and general mood improvement resulted, and improved sleep followed, increasing mood and decreasing depression even more. This form of therapy also lifted the spirits of cancer patients undergoing treatment.

Two subject groups were used to measure energy expenditure and heart rate when watching a film. Half of the subjects watched a humorous movie, the other half saw a more serious film. Those who laughed during their movie were found to have burned 10 calories in 10 minutes, while the other test group did not burn any calories. Imagine exercising with a friend who can always make you laugh, the number of calories you would burn each time is sure to keep you healthy and happy!