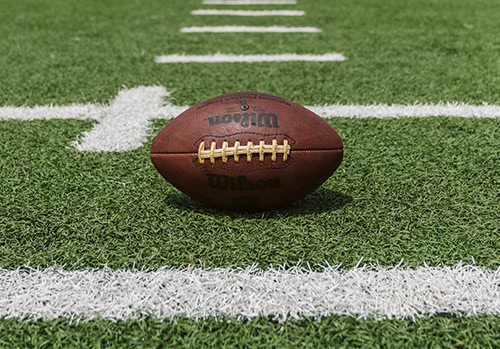 Photograph by Dave Adamson on Unsplash.

The first college football game was played with a soccer ball and took place 153 years ago on November 6, 1869. New Brunswick, New Jersey hosted the event in front of about 100 attendees. Rutgers College challenged the College of New Jersey, the future Princeton University, to a three-game football series. The invitation came following the College of New Jersey decisively defeating Rutgers in a baseball game in 1866. Every football score counted as a game, and the contest ended after 10 games, resulting in a Rutgers 6-4 win. Princeton responded with a victory in the next meeting to tie the series at two. The teams never played the third match, so both schools finished their inaugural 1869 season with a 1-1 record.

Revolutionary college football coach John Heisman recorded 186 wins and 26 winning seasons in his 27-year coaching career. He also invented football strategies that are still in use in college and professional football. Probably the most significant of his contributions was Heisman’s suggestion of legalizing the forward pass. For three years, he lobbied the rules committee to permit the tactic. He believed it would open the field and make the games safer for players. In 1906, Heisman’s wish became a reality as the committee adopted the forward pass into play. The Ohio native also initiated the center snap, handoffs, pre-snap shift, and the hike/hut cadence. He also suggested adding a scoreboard for the fans in attendance and dividing the game into four quarters instead of two halves.

The University of Minnesota Golden Gophers and University of Wisconsin Badgers football teams have played each other 131 times between 1890 and 2021. During that time frame, the two squads only missed out on a gridiron faceoff in 1906. The 115-year consecutive meeting streak is also the longest at college football’s highest level. Beginning in 1930, the two teams battled for the Slab of Bacon trophy. According to the Wisconsin athletics website, the prize was “a piece of black walnut wood carved with a football. The football was topped by a letter ‘W’ or ‘M,’ depending on how it was held.”  The trophy lasted until 1943 when it went missing. In 1994, the award was found by a Wisconsin University intern cleaning a storage closet. In 1948, the two teams began using another trophy dubbed Paul Bunyan’s Axe and continue today to exchange possession of the award when either side wins their rivalry game.

Fact #4 Most consecutive college football games played without a loss

Between 1907 and 1917, the University of Washington played 64 straight games without suffering a defeat. At first glance, you might think this fascinating college football fact is about a winning streak, but it involves games that include wins and ties. Sixty wins and four ties covered the decade-long accomplishment. The University of Oklahoma’s 47-game dominance between 1953 and 1957 remains the nation’s longest win streak at college football’s highest level of play.

Did you enjoy reading about these fascinating college football facts? If so, please read another one of our articles about the benefits of biotin.

We hope that this information on fascinating college football facts is helpful for you.

Insurance is oftentimes overwhelming, and we want to shed light on the industry by answering your questions. Comment below and your question may be the topic of our next post!