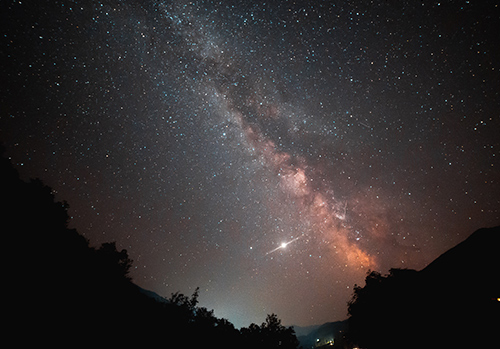 Photograph by Aleksa Kalajdzic on Pexels.

Across the globe, sky gazers enjoy many intriguing celestial moments. Meteor showers, lunar eclipses, solar eclipses, blood moons, and planetary conjunctions are a few recent astronomical occurrences seen in the sky. This summer, five planets in our solar system will create a planetary alignment, appearing in a diagonal line to observers on Earth. The planets revolve around the sun on a fixed path. When they pass near each other, they look like they are forming a line from our viewpoint on Earth.

When does the planetary alignment occur?

Beginning on June 24, 2022, people can witness the unique cosmic event before sunrise. Planets Mercury, Venus, Mars, Jupiter, and Saturn will be visible to the naked eye in the morning sky. The planets will appear in order of increasing distance from the sun, thereby creating a unique planetary alignment. Additionally, Earth’s crescent moon will nestle between Venus and Mars.

Earth elliptically orbits the sun every 365.25 days, but the other planets complete a trip around the sun at differing lengths of time. Mercury orbits the sun every 88 days, while Venus does so every 225 days. Mars’ trip is 687 days. Jupiter and Saturn complete an orbit around the sun every 12 years and 29 years, respectively. These contrasting timelines result in the planets getting near each other sporadically. The last time these five planets aligned in this sequential order was between late December 2004 and early January 2005.

All five planets will be visible without the aid of a telescope from June 24, 2022, to early July 2022. While Uranus and Neptune are not a part of this upcoming planetary procession, you can still view them on specific dates with the help of a telescope. If you are in an area with minimal light pollution and have a six-inch telescope, you can see Uranus and Neptune. Light pollution is artificial light that limits our ability to see the stars and planets in our atmosphere. Dwarf planet Pluto is visible with an eight-inch telescope.

In March 2022, Venus, Mars, and Saturn assembled in a cluster for early-hour viewing. Mercury was too close to the sun for viewing but will become visible in mid-June. Also, in March, Jupiter remained above the horizon but too low for most places to observe it. By April 20, 2022, Jupiter came into view. Earth’s moon joined the celestial party on April 23, but on April 29, it moved out of sight because of its proximity to the sun. On May 21, the moon rejoined the alignment before another exit. The moon will re-enter the alignment on June 17.

How can I see the planetary alignment?

In North America, the best chance to view the planetary alignment is about 45 minutes before dawn, somewhere with a flat horizon and minimum light pollution. The five planets will extend from east to the south in the northern hemisphere and extend north to the east in the southern hemisphere.

How do I know if I am looking at a planet or a star?

Planets do not twinkle, but stars do. Furthermore, stars may twinkle with their light appearing to change color. Stars are farther away from Earth than planets, and therefore, Earth’s atmosphere impacts the beam of light from a star more than a nearby planet’s light beam. The phenomenon of twinkling stars is the result seen by Earth observers.

How often do the planets align?

There are three types of planet parades, and all of them have occurred recently. The first alignment involves a viewpoint from above our solar system. The planets appear to form a line on one side of the sun. The most recent example took place almost two years ago. Our solar system’s eight planets and downgraded Pluto aligned on one side of the sun on July 4, 2020. The second type of planet alignment requires the planets to become visible in a small portion of the sky. The June 2022 alignment falls in this category. The third type of planet alignment rarely occurs. When it does happen, all the planets of our solar system are observable in one night. In August 2020, observers witnessed such an event.

Make sure you mark your calendar and get up early on Wednesday, June 24, 2022, to witness this galactic event.

If you want to read more about cosmic phenomena, please read about a meteor blazing across the sky in 2021.

We hope that this information on planetary alignment is helpful for you.

Insurance is oftentimes overwhelming, and we want to shed light on the industry by answering your questions. Comment below and your question may be the topic of our next post!