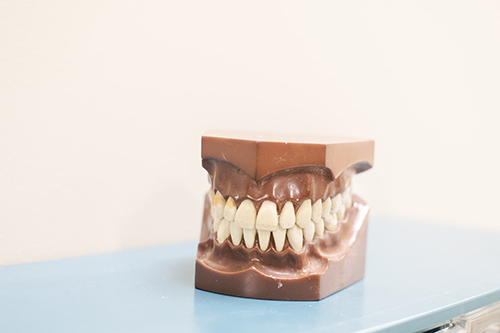 A new study published in Science Advances suggests a link between gum disease and Alzheimer’s. Scientists studied dead and living patients with diagnosed and suspected Alzheimer’s. A molecule called gingipain (produced by gum bacteria) was found in nerve cells in the brains of people who died with Alzheimer’s. Tests on mice confirmed the bacteria, Porphyromonas gingivalis could migrate from the mouth to the brain and that the toxic protein, gingipain, destroyed brain neurons. The bacteria also boosted the production of amyloid-beta, a component of brain plaques associated with Alzheimer’s. Subsequent testing on mice revealed that drugs that block the toxic proteins produced by the bacteria stopped brain degeneration.

Enzymes made by P. gingivalis, called gingipains, interact with key Alzheimer’s proteins called amyloid-beta and tau in test tube experiments and in the brains of mice, the researchers found. Gingipains prod A-beta to accumulate and tau to behave abnormally, both signs of Alzheimer’s disease in people, the experiments suggest. And compounds that block gingipains seemed to reduce the amount of A-beta in the infected mice. The findings offer evidence that P. gingivalis and gingipains in the brain play a central role in the development of Alzheimer’s disease. The research was paid for and conducted in part by employees of Cortexyme, Inc., a San Francisco–based biotech company that’s developing these compounds.

While this research is far from proven, the results do fit with an idea that is gaining traction among Alzheimer’s researchers who believe bacteria, viruses, and even fungi could spark the disease. Since one of the biggest pools of bacteria in your body lives in your gums (if they are not clean) it made sense to look at whether gum bacteria played a role in Alzheimer’s. However, experts caution that while this small study suggests a possible Gum Disease/Alzheimer’s link, it is still inconclusive. More samples of genetic material are needed to figure out exactly which infectious entities might be in the brains of people with Alzheimer’s. Therefore, more replication is needed. Currently, there is no cure or effective treatment for Alzheimer’s, but researchers are hopeful their findings could point to new ways to help people.

Should We Still Floss Our Teeth?

Yes, absolutely. Keeping a healthy set of teeth is more important than you might think, as many diseases and conditions (including diabetes, respiratory disease, osteoporosis, and cardiovascular disease) have direct correlations to dental health. Having health insurance is a good idea too.

If you have Dental Insurance questions call Empower today. Let us help with your questions so you can get back to the activities you enjoy the most.